How could the teaching of Islam be improved in schools? [Extended Project]

In this blog, we will have a look at teaching of Islam, with a particular focus on how to make it interesting.


I really believe that when information is presented in a multitude of different ways and give pupils lots of diverse experiences in the classroom, it makes the subject really come alive. Cross curricular RE can make themes enjoyable too. And when Art is involved, it can add a dimension of creativity. I have blogged about it here.

Resources are all important.
Artefacts


Artefacts have always been a great way to make religion come alive. Most Local Authorities still have RE boxes with artefacts on the Five Pillars of Islam.


It’s surprising how many schools do not use the resources they have. Of course sensitivity is important. Some pupils may not wish to talk about the faith, however the vast majority are only too keen, and in some instances parents or Imams of children are happy to come into school. It’s always best to have a private conversation with the Muslim pupil in schools were there is not an overabundance of Muslim pupils. Diversity of opinions is also good with this approach.


Mosques vary widely in England, from small converted houses that only cater for a small population to purpose-built Mosques that include services for the community that it serves.


But what if my school does not have a Muslim population or a Mosque?


Let’s take an example from Heathfield Community School, a largely mono-cultural school in Taunton, Somerset. I came into the school to work with pupils and introduced myself as an Artist and the ideas behind my Islamic Art. Although I visited each class and helped kick-start the projects, the teachers took over after I left and took ownership of pupil learning. It’s really empowering to take a project where you want to. One class for example focussed a bit more on tiles from Morocco and the RE department did a whole module on Islam. 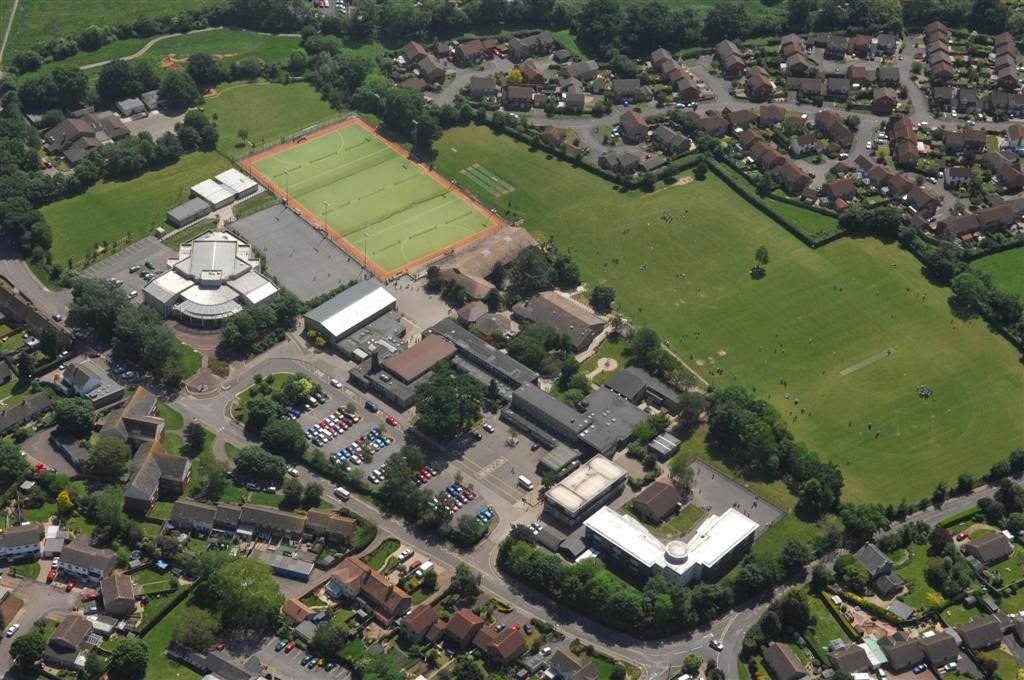 Heathfield Community School is a large Comprehensive in Taunton. Sophie Torr, Head of RE with Jade McVeigh wanted to do a joint project combining the RE and Art Departments through Islamic Art. The Art Department was just as enthusiastic as RE.

From the outset it is important to know what the teaching focus is in each lesson. Cross-curricular working does not mean losing sight of subject specific goals. Be clear about what the goals are going to be.

The following are the aims from each subject:

Objectives in RE:
Similarly the Art Department had clearly defined objectives. 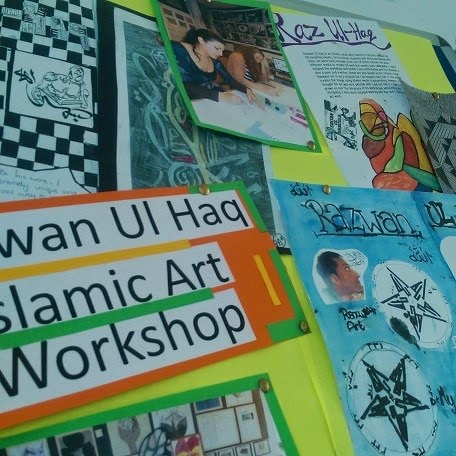 Above: Part of the Display from the RE Corridor. We showed pupils working, had photographs of pupil work, and included some photographs from a parent’s workshop too. Letters were sent to parents informing them of the upcoming workshops which also extended an invitation to a parent’s workshop that was held in the evening. This not only helped with learning but went some way to foster principles of mutual respect and understanding in the wider community.

Above: We felt it was important for parents to know and celebrate the project and the response was very good and very positive! It also provided an important opportunity to allay any concerns they may have. 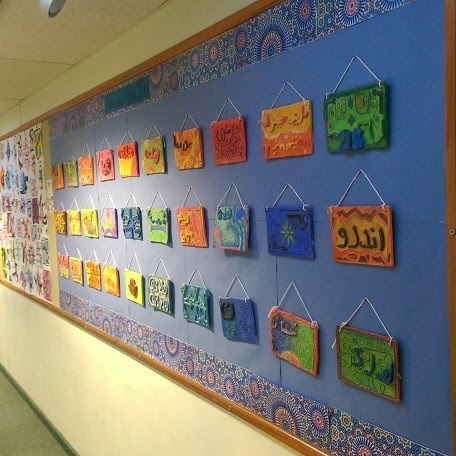 Above: Pupil work is displayed opposite the offices of the Senior Management Team. We had full support of the Head and the SMT. Projects like these really help put RE at the forefront and become a feature to celebrate! Being proactive works! 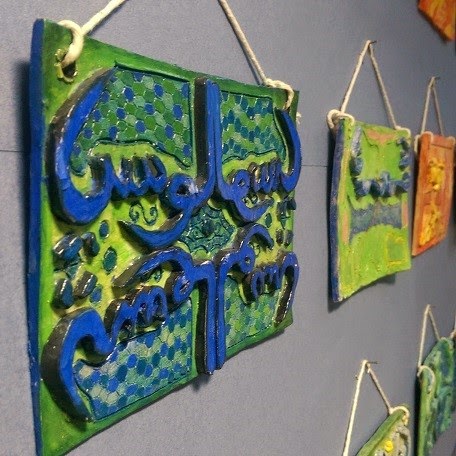 Above: Detail of pupil work. A tile designed by a pupil using colours she researched on the web (Mosque colours from Isfahan). The Arabic also follows rules of mathematical symmetry. There was also a mathematical element to the cross curricular project! 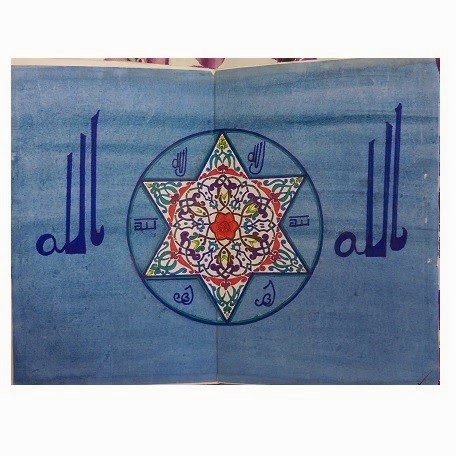 Above: Many pupils were so enthused, they went out and did some research on the internet. 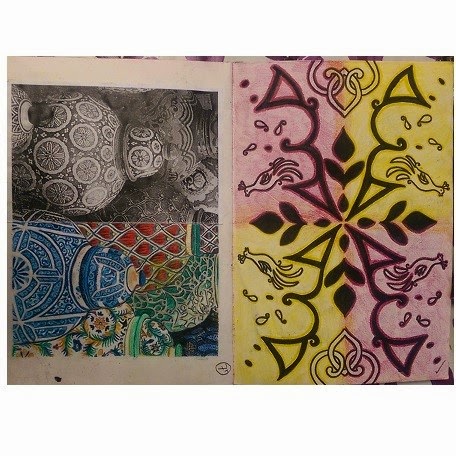 Above: Pupil sketchbook from Art 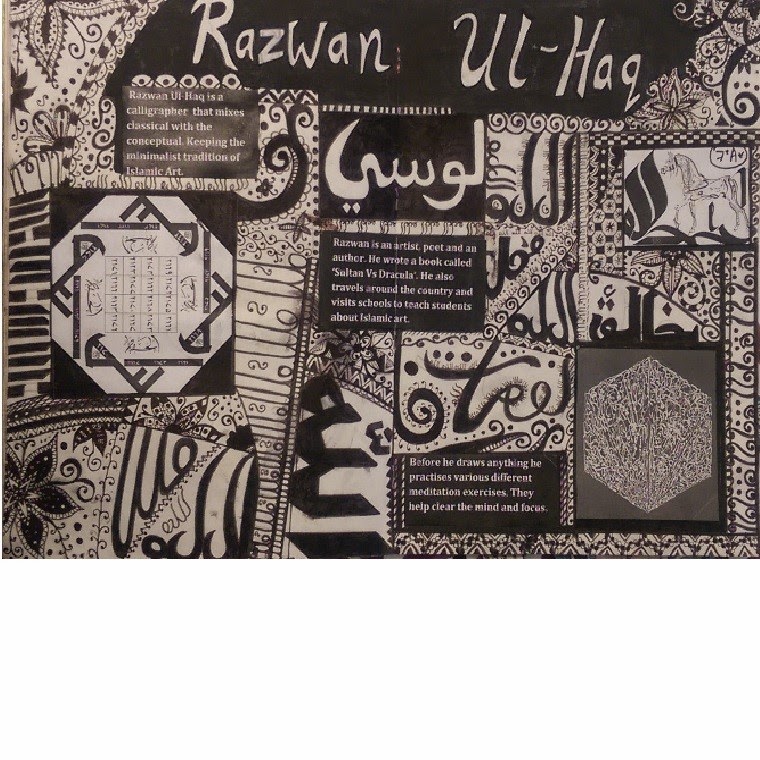 Above: Some Art Classes did a study of my work and the above shows a page spread from one pupil. She has decorated her work by using different calligraphic designs for the Arabic word for God “Allah” and has added some of the 99 Names of God onto the page. 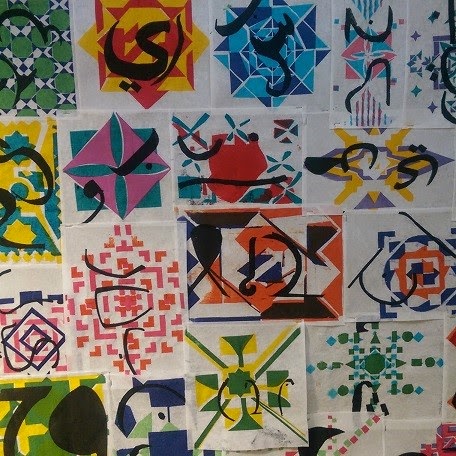 Above: Art Teachers took ownership of the project by extending the project into exciting areas. One Art teacher got pupils to do creative designs with letters and patterns onto cloth.


Jade McVeigh liaised with the various different departments and many parts of the school community came on board, which included the schools Cedar Centre for Autistic Pupils and there was an opportunity for non-specialist teachers and student teachers to visit whilst the project was taking place, thus raising the profile of Religious Education. Pupils themselves were instrumental in raised

What we learnt and the changes for the follow up Project.

The Project was so well received that we decided to go for a bigger project in 2015. We are currently in the middle of a follow-up Project in 2015.

​"Raz's visit to our school created a buzz of creativity and reflection. The impact of his workshops is felt across the whole school." Jade McVeigh, Teacher of Humanities

"As part of our Art curriculum here at Heathfield we are always developing projects and links that celebrate and teach our students about the world in which we live. Promoting a tolerance, understanding and respect in young people, who are the future. By teaching Islam through Art the students are able to learn and creatively engage through a medium that allows all students to access and create. It is not just about the final product, even though beautiful pieces are produced, it is about the journey to that point, using the creative process as a learning tool. And through this an understanding of Islam can be taught." Heather Essadiq,  Acting Head of Art
“Razwan time at Heathfield was inspirational. He manages to cross curricular borders and create discussion on Islam, with students, through creative processes. Open dialogue happens with the students about a religion, Islam, that is talked about so much but misunderstood by many. Razwan creates an environment where students feel free to ask questions and investigate ideas whilst making, without fear of judgement. Razwan has a kudos that is unique and the students respond to his teaching with a respectful curiosity. ” Natasha Rand, SLT Enterprise & Careers Education.

“Razwan, through his work with students shares his culture and involves them in an exploration of Islam. The students relate to him really well and feel comfortable about asking questions about his faith and culture. He talks to them about the traditions and values of Islam and involves them in producing fantastic art work and encourages wide discussion. It certainly addresses some of the key issues facing British citizens today in a very positive way.” Kim Woodward, Teacher of Maths and Citizenship Coordinator

"Raz’s workshops are the highlight of the RE year at Heathfield. I totally agree with everything said above" Sophie Torr, Head of RPE


Razwan is on Twitter as @Islamic_artist
Posted by Unknown at 08:15