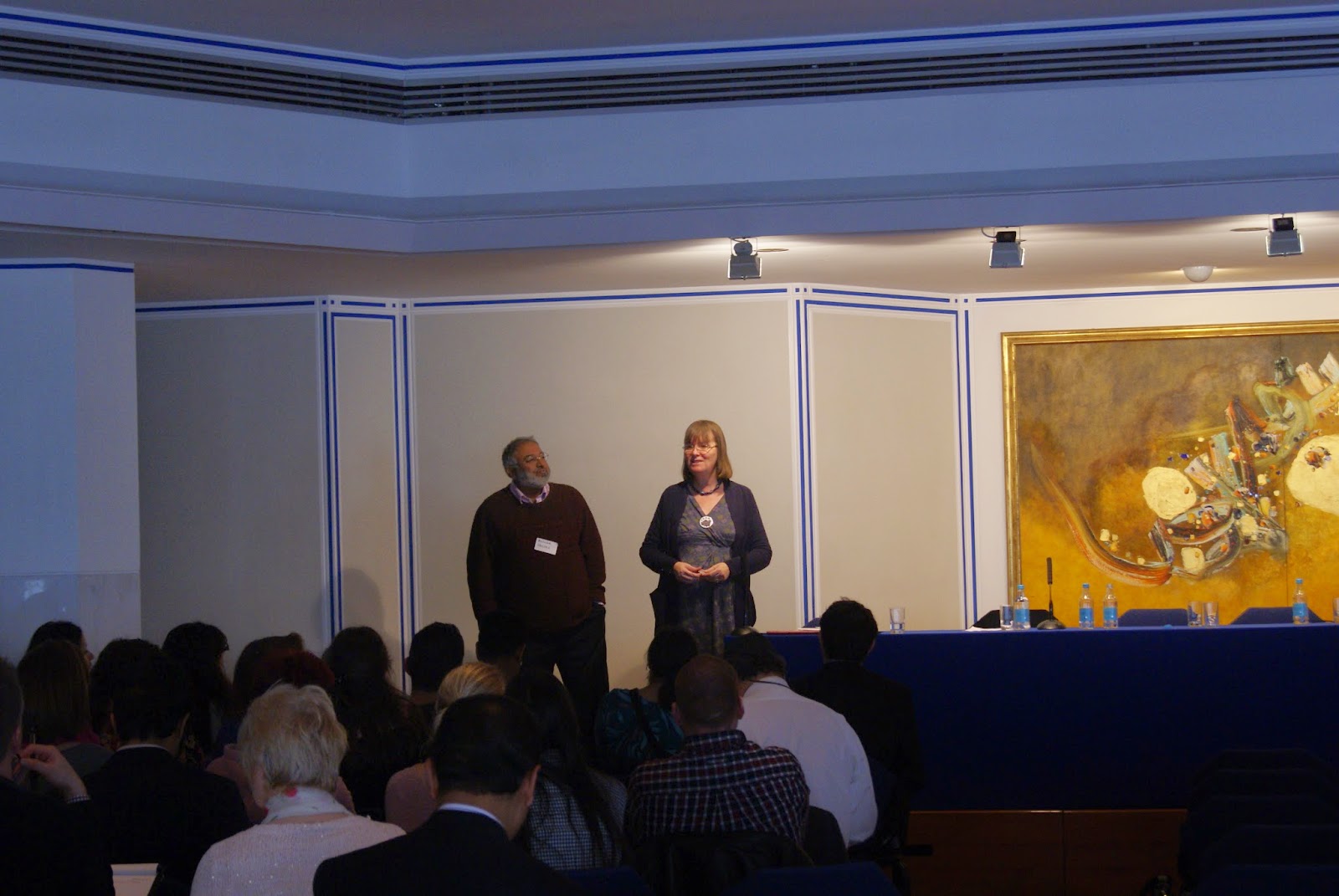 I was privileged to be at the first London RE Hub conference at the beautiful Ismaili Centre on Saturday. Organised by the brilliant Andy Lewis and his excellent team, the event was attended by teachers, faith leaders and professionals with an affiliation to RE from in, around and beyond the capital.

The day aimed to provide “authentic, useful subject knowledge” on faiths and non-religious worldviews. With an impressive line-up of scholars and speakers for each of the workshops, this objective was most certainly achieved.

The session on Islam, jointly led by Imam Monawar Hussain (Oxford Foundation) and Deborah Weston (NATRE Executive), addressed common misconceptions about jihad and the distinction between its various forms. This was very timely in the context of the growth of ISIS and Boko Haram which has presented classroom practitioners with a huge and unenviable challenge, particularly when dealing with the subject of Muslims and conflict.

What drives believers who identify themselves with a religion whose very name denotes ‘peace’ to cause maximal death and destruction in the name of God? It is a question that troubles subject specialists, students and Muslims themselves. Little wonder most of the delegates were seen sitting in this workshop!

Imam Hussain traced the roots of Islamist terrorism to puritanical Wahhabism in the late 1700s, that was inspired by a vision of Islamic hegemony that bullies everyone into submission. However, this only goes so far.

There is a deeper, and therefore less apparent, cause for the unspeakable horror we are witnessing in Iraq, Syria, West Africa and elsewhere. Is it Western foreign policy, or failed peace efforts in the Middle East? Not quite.

The origins of this modern savagery are actually linked to Jesus. Perplexed? Then read on.

Muslims, like Christians, expect Christ to revisit the earth - a belief based on prophecies contained in both traditions - to usher in an era of universal harmony and justice. Yet the image some have painted of the returning Messiah (who would be joined by the Mahdi) would make Abu Bakr al-Baghdadi appear benign.

According to a literalist understanding of some hadith, when the son of Mary reappears, he will carry a sword, smash every crucifix in his sight and kill anyone rejecting Islam – liberating the ummah and making real the goal of an invincible global caliphate.

Of course, to all who know and love Jesus as one who personified meekness and turned the other cheek, such a thought is intolerable. It is also a gross misreading of texts intended to be understood allegorically, and contrary to the Qur’an’s guarantee of freedom of conscience: “There is no compulsion in religion” (Ch 2: V 257).

But for the young, impressionable and theologically illiterate, the idea of a ‘Jihadi Jesus’ is attractive, and to help pave the way for his second coming, some feel they must be ready to offer their lives. It is the highest form of sacrifice they believe will earn them eternal bliss.

This deadly doctrine was challenged head on by a 19th century reformer, Mirza Ghulam Ahmad, who warned about the perilous consequences of belief in a bloody-thirsty Christ that was (and still is) prevalent among some sects.

In his book ‘Jesus in India’, Ahmad lamented: “From their very childhood, stories, anecdotes and false ideas about jihad are dinned into their ears and inculcated into their hearts, the result being that gradually they become morally dead and cease to feel the heinousness of their hateful actions.”

He predicted: “The beliefs of some… known as Wahabbis, regarding a bloody Mahdi and a bloody Messiah, are affecting their morals very badly, so much so, that on account of their bad influence their dealings with other people are not based on honesty and good will, nor can they be truly and completely loyal to a non-Muslim government."

“The ultimate result of a principle like this is that hearts become devoid of the quality of human sympathy and that mercy and justice, which are great human moral qualities, take leave of men.”

Ahmad emphasised that the Qur’an’s permission for armed struggle was solely for self-defence, at a time when persecution of Muslims had reached an extreme and the very life of Islam was under threat. In the 23 years of Prophet Muhammad’s ministry, approximately three months were spent in battle – illustrating how minor jihad bis saif (striving with the sword) was when conditions necessitated it.

Ahmad’s own claim as a divinely commissioned reviver of faith might not have been accepted by all of his co-religionists, but he was the first to directly address violent jihadist narratives. He cautioned other Muslim scholars and leaders that unless they did so too, movements like ISIS would inevitably flourish.

So it was great to learn last Saturday that more than a hundred prominent Sunni figures worldwide, including Imam Hussain, are doing just that. They have engaged in an important jihad bil qalam and written a comprehensive open letter to al-Baghdadi to expose the theological baselessness of ISIS. The letter can be read here - http://www.lettertobaghdadi.com/ - and will also feature at a ‘United for Peace’ event at the University of Birmingham in May. It is a small yet significant step. And it is a jihad well worth supporting.

Find Waqar Ahmedi on Twitter <here>
Posted by Unknown at 12:48

Email ThisBlogThis!Share to TwitterShare to FacebookShare to Pinterest
Labels: Conference